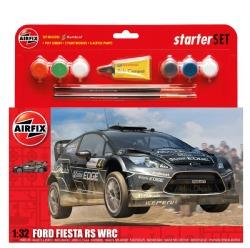 Developed from the standard Fiesta road car, the Ford Fiesta RS WRC is a bespoke rally car built by M-Sport for the works Ford Rally Team for use in the World Rally Championship. The new WRC regulations for 2011 required a turbocharged 1600cc, a reliable and poweful engine, keeping the flame-spitting character of the WRC cars intact.

A number of teams now drive the Fiesta RS WRC in the World Rally Championship and it has scored a number of victories and been competitive with both the works rally team and a number of privateer teams.