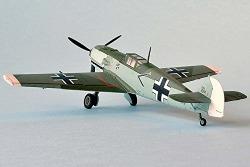 The Messerschmitt Bf 109E was one of the first true fighters of the modern era and was the Luftwaffe’s main bomber escort during the Battle of Britain. After some spectacular successes at the beginning of the war it found its main challengers to be the R.A.F.’s Hurricane and Spitfire.Messerschmitt and iRobert Lusser during the early to mid 1930s, it Included such features as all-metal monocoque construction, a closed canopy, a retractable landing gear, it was powe.red by a liquid-cooled, inverted-V12 aero engine. The "E" was the Luftwaffe's fighter during the Battle of Britain. Model Scale 1:72

Recommended for children over 8 and adults