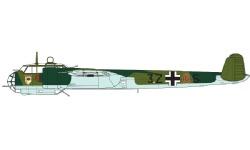 During the early years of the Second World War the Dornier Do17 was one of the Luftwaffe’s most important medium bombers. Developed during the early 1930s, first as a mail plane then as a reconnaissance bomber, the Dornier was nicknamed ‘the flying pencil’, due to its very thin tapering fuselage. While early versions used inline engines, the iconic and most widely used Z variant used Bramo radial engines, and featured a re-designed cockpit area, with the intention of providing more space and defensive capabilities for the crew.

However, this was not wholly successful; its small crew area and lack of power operated turrets making it easy prey for Allied fighters. Of all the German medium bombers used in the Battle of Britain the Dornier was the slowest and therefore most vulnerable and the battle proved to be the aircrafts’ swansong over Western Europe, with the aircraft seeing only limited use in the later theatres of the war, before being phased out altogether by mid-1942. The Dornier became a symbol of the Blitzkrieg, but its vulnerability put paid to any chance of longevity of service.