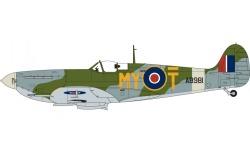 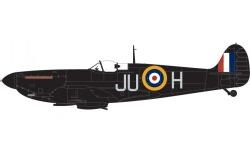 Although best known for its use as a daylight interceptor fighter, and in later days as a fighter bomber, the Spitfire also undertook a number of specialist roles for the RAF. During the winter of 1941/42 it was feared that the Luftwaffe would once again strike at the heart of Britain by bombing its major cities as it has the winter before.

While single engine fighters, like the Hurricane, had been used in the past to intercept these bombers it was decided that a more potent fighter was needed and a number of Spitfire VBs were converted to night fighters by painting them black. The idea was to direct them to the bombers using searchlights. However the operations were not a success.

The Spitfire could be tricky to fly at night, with its narrow track undercarriage and immense engine torque making even taking off difficult. Many were lost in accidents and the idea was quietly dropped. Another use for the Vb towards the end of the war was a high speed air sea rescue machine. operating over the sea off the Suffolk coast, these Spitfires were able to spot downed aircrew and radio their position to enable Coastal Command or the Royal Bay to rescue them. Contains one model with two decal options:

Recommended for children over 8 and adults